Note: This site contains affiliate links. You can see the full disclosure by clicking here.

If you’re interested in sharks, you’ve thought about having one as a pet. Even though having an actual shark as a pet is virtually impossible, there are lots of freshwater sharks for fish tanks which can thrive well in the aquarium at your home.

Technically, these species fish aren’t sharks. They are big, shark-like fish usually belonging to the catfish or carp families. That said, they look and often behave like sharks, which is how they won their name.

Can Freshwater Sharks For Fish Tanks Be Kept In a Home Aquarium?

Many freshwater aquarium sharks are not true sharks, but Cyprinid family members, including Rasboras, Danios, Minnows and Barbs,. There are also several catfish who got the nickname of “shark” due to their physical appearance and feeding habits. Such fish are all involved and will certainly encourage some movement in your tank.

Sharks, unlike other freshwater fish, do not respond to other mates. Rather, they respond to physical surroundings. It could take several weeks or more, depending on the tank’s plants and decorations. While they’re very active, it takes a much longer time for a new shark to be confident in its new environment than most other fish, and a pet owner may not see their shark for a long time.

When a shark gets confident, it will claim a territory and usually remain there. If the tank is small, the fish will attempt to assert dominance over the entire aquarium and become aggressive or, at least, start nipping. When you plan to keep a shark in a smaller tank (under 55 gallons), hold it with fast moving fish and fish without long fins.

What Are The Best Freshwater Sharks For Fish Tanks?

Nearly all freshwater aquarium sharks fall into one of two groups: aggressive Cyprinids (Minnows and Carp) and predatory Catfish. We put together a full list of the best freshwater sharks to have in your aquarium. Some are tall, some little, but they’re all incredible. 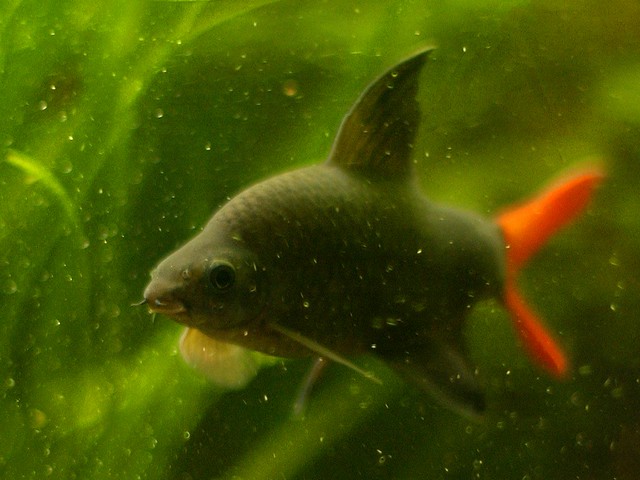 It’s evident when young that Black Sharkminnow is a close relative to the first two Shark species. This Shark, however, grows huge compared to 24 inches typical for aquarium species and up to 36 inches in nature.

Black Sharks are popular and attractive enough to be pursued by a fisherman for both sport and food. Black Sharks are somewhat rare in pet trade, but often marketed to naive aquarists who don’t know they’re going to outgrow anything but the largest aquariums.

The Adult Black Sharks have floating extensions of the fin and a purplish black color that is distinctive. They are strong, weighing up to 25 lbs!

Cyprinids as a whole tend to be omnivores and are hardy aquarium fish. Considering the Black Shark’s size and aggressive nature, it ‘s important to pair them with fish that are quick enough to get out of the way so they have enough space for them to claim in an area. 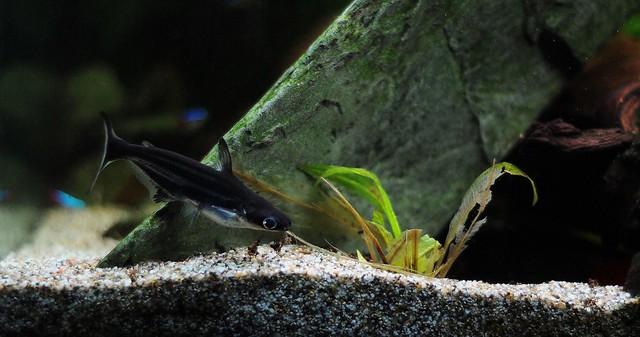 They are dynamic and vividly colored, with a purplish black iridescent mixed with light white tones. Nevertheless, Iridescent Sharks can attain 3 to 4 feet in length and are a schooling fish.

Iridescent Sharks are tightly linked to the Mekong Giant Catfish (Pangasianodon gigas) which is up to 10 feet long and is one of the biggest freshwater species of fish in the world.

Like other catfish, Iridescent Sharks are midwater dwellers that swim easily and are not shy about seeking food on the sea. They ‘re friendly group fish, but they’ll eat tank mates small enough to fit into their big mouths.

So long as you have room for them, Iridescent Sharks are enticing additions to a tank-buster neighborhood aquarium! 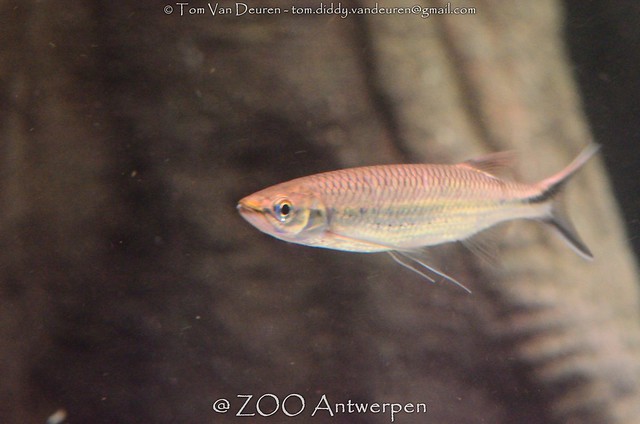 The Silver Apollo Shark is more passive than the Red Tail Shark and Bala Shark. It requires mildly acidic water, pH between 6.0 and 6.5 and temperature range 66 ° F to 79 ° F.

It’s a jumping shark. Keep in a lid tank at all times. The Silver Apollo shark is much more likely to leap out of a tank within days or longer.

It will gradually settle in and show a much less erratic swimming pattern, but if spooked, it can swim full speed into the side of the tank.

This is among the few freshwater aquarium sharks to be considered a surface resident. It’s an ultra-fast eating machine that isn’t particular about what it eats, so it may prevent less agile fish from having a meal. These fish can benefit greatly from bloodworm snacks or other live food. 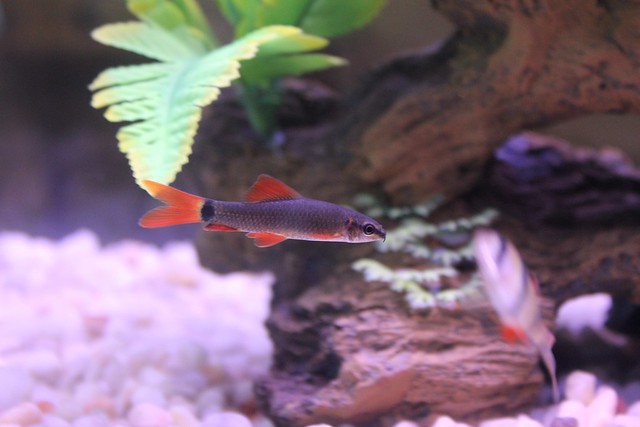 The rainbow shark is another freshwater shark that is technically a catfish. They ‘re a perfect addition to a tank.

Since they like many hiding places, make sure to give them plenty of thick vegetation, caves and dens to explore.

Rainbow sharks are very territorial with other sharks, particularly red tails. When you’re searching for tank mates, seek fish larger than them with similar temperaments. They shouldn’t be too violent, but still keep their own. Rainbows will torment friendly fish at all costs.

Though Rainbows prefer tank bottoms, they have sensitive barbels about their mouths that can be easily hurt. Choosing the right substratum is important to prevent injury. Use only sandy or smooth substrates, as larger, rougher rocks may cause damage.

Such fish prefer to live on the tank ‘s bottom, but will explore anywhere. Believe it or not, they ‘re pretty decent jumpers, so make sure you ‘re covering the tank top.

Not all aquarium sharks are hostile, and some of them may not suit your tank’s configuration. I know that appearances are going to be your first consideration as you pick, but with these sharks for freshwater fish tanks, it’s important to mind other fish in the aquarium. Give it a shot and make a smart decision. Having a full shark tank to openly display with is when the fun starts.

Petalove is about helping everyone live a better life with their pets. A petcare blog where you can find tips and advice to help you keep your pet happy and healthy. We bring you your weekly dose of cute🐦, funny🐶, warm🐱and fuzzy🐰. Follow ➡️@petaloveblog for more!

Why Does My Fish Tank Smell? Common Causes And Reasons

Can Betta Fish Live With Goldfish: What You Need To Know

Can Betta Fish Live With Goldfish: What You...

Why Does My Fish Tank Smell? Common Causes...

How To Setup A Freshwater Aquarium

How to Clean an Aquarium: 10 Easy Steps

best pet birds corona virus covid 19 dog food storage ideas pet food
We use cookies to ensure that we give you the best experience on our website. If you continue to use this site we will assume that you are happy with it.OKPrivacy policy